(The image above, prepared by David Fisher, shows the 1973 OS map (black) overlaid on an 1877 map (sepia).This shows the earlier square on the site, and access from twittens to North-West, South and South-East which still exist.)

The Regency Society is critical of current proposals to alter Brighton Square as outlined in planning applications BH2017/00762, 00768 & 00797, namely to reclad the facades of the existing shops and associated housing, to amalgamate nos 12-16 Brighton Square to form a single restaurant space, to install an enclosed dining area in the square under a canopy and to raise and thus obscure the existing fountain sculpture.

Brighton Square was built in the mid 1960s to designs by Fitzroy Robinson and Partners. It consists of a mixed development of flats above small shop units, built on one and three storeys around a small open-to-the-sky square. It employed a traditional palette of materials – horizontal timber boarding, hung tile, brick and flint – and attempted to echo the scale of the Brighton Lanes while reflecting the architectural idioms of its day.

Though it replaced older, derelict buildings, it reproduced almost exactly the pre-existing footprint of this part of the Lanes: the square itself and the alleyways or ‘twittens’ that fed into it had existed from at least the end of the 18th C. As such it was regarded as an early example of ‘Contemporary Vernacular’ design and received a Civic Trust Award. Although it has survived intact, it is showing the effects of poor maintenance – the tiles have lost their colour and the square is strewn with a miscellany of ill-chosen street furniture and signage.

In 2015 the trustees of the Regency Society were given a detailed presentation of proposals for the “Hannington Lane” development by the architects Morgan Carn. Brighton Square was to be preserved, with minor changes, at the centre of a new system of small shops and alleyways. It received the enthusiastic support of the Society and of the Conservation Advisory Group and went on to be granted planning permission. Since then, however, the area around Brighton Square has been taken out of the bigger scheme and is being developed separately to a different and inferior design, not by architects, but by shop-fitters. 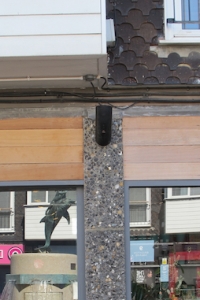 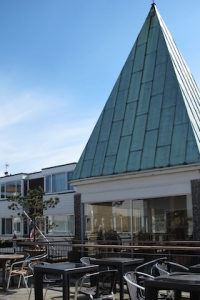 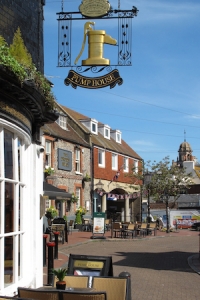 From left: the current poor state of the tiling, the pyramid and the entrance to the square.

The Society objects to the following aspects of the new proposals.

The Society believes that it is important to conserve at least a few representative buildings from every period. Few examples of mid-1960s design survive in our City and Brighton Square deserves to be conserved precisely because it is an example of good design of its period. It is not listed and, astonishingly, it does not appear on the Local List, but it does fall within a Conservation Area.

The current proposals will destroy the aesthetic integrity of the square, they will remove a public amenity and customary right of way and they will change the way that this area of the Lanes functions. They should not be granted planning permission.

Text and images by David Robson