Sir Simon Jenkins, journalist, broadcaster and author, former editor of the Times and the London Evening Standard and campaigner for historic buildings is our current President. On 8 March he entertained a full Music Room at the Royal Pavilion at our Antony Dale lecture for 2017 on bringing old houses back to life.

He opened his evocative and thought provoking talk by asking us to imagine Lord Curzon leading his blindfolded betrothed through a wood to Bodiam Castle as it was when he purchased it in 1916 (the image above is from around this date). Curzon revealed what was then a vast, archetypal ‘picturesque ruin’ as his idea of a perfect house. Sir Simon asked us to imagine her response - seeing his vision of it rather than the overgrown and neglected pile it had, by that time, become. She would have seen it through his eyes, as somewhere he loved, a living thing. Buildings evoke and express our emotional realities. This lecture was all about buildings not as structures but as lived human experience.

We learned about the poignant story of Kingston Lacy, lovingly designed from afar by furniture and art collector William John Banks who had fled to Italy following a scandal to avoid execution, and sent copious detailed drawings and notes on how he wanted his house to be decorated and furnished. He loved it, but was never to live in it.

People form personal relationships with buildings based on their interaction with them rather than as a result of the instruction and ‘received wisdom’ of conservators and and historians. This is what brings old houses back to life. During his period as Chairman of the National Trust, Sir Simon encouraged staff to understand this vision and enrich visitors’ experience by moving away from a ‘do not touch’ instructional approach to one in which historic buildings are enjoyed directly, experienced and remembered through personal interaction. 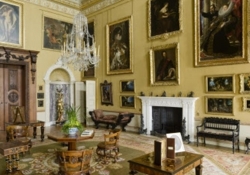 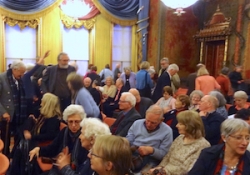 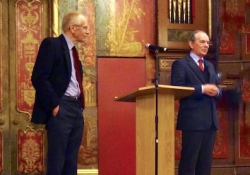 Roger Hinton and Simon Jenkins
above left: the Italianate interior at Kingston Lacy

Examples abounded of evidence that people visiting old buildings generally want to know what it is like to live there much more than to admire the paintings or artefacts recommended by conservators. Visitors to Castle Howard (included in last year’s RS tour to Yorkshire) turned out, when asked, to be more fascinated by photographs of the family than by the important portraits by great artists they were urged to admire as works of art.

Dennis Severs' house in Spitalfields was recreated by its American owner in the late 20th century to capture, as closely as possible, the reality of its occupation by Huguenot silk weavers during the 18th and 19th centuries. His vision was for visitors to experience the house as a journey to another time. There are sights and smells of life as it was lived - including half eaten meals and possessions strewn around to conjure for visitors the lived reality of the house, led by their senses.

Kipling’s House (Bateman’s) in Sussex was an example of the difficulty of recreating a reality with which visitors can engage. Kipling’s study was always a mess during his lifetime - knee deep in papers. Conservators had presented a typical study of the period, carefully and tidily arranged - yet the reality of the author’s occupation of it was quite different. Visitors want to know what it was really like when he worked there, and to imagine him working.

Jenkins ended his talk by taking us, in imagination, to Allan Bank, Wordsworth’s House in Cumbria. The house is open for people to inhabit during their visit as they wish. Tea, coffee and milk are laid on in the kitchen, and the attic is full of toys for children. The public has responded to this extraordinarily - people visit and bake cakes in the kitchen. There are sometimes queues to do the washing up. The encouragement to use the house ‘as your house’ has had enormous appeal. Comments in the visitors book include ‘ No-one from the National Trust pestered me’.

Questions after the lecture were against the backdrop of Sir Simon’s final slide - of a couple at Allan Bank sitting at a window enjoying tea with feet up as if in their own home, admiring the view of Grasmere as Wordsworth must have done.

This memorable evening was a real, lived experience in our own, great house in Brighton, brought vividly to life by our presence with our visionary President.