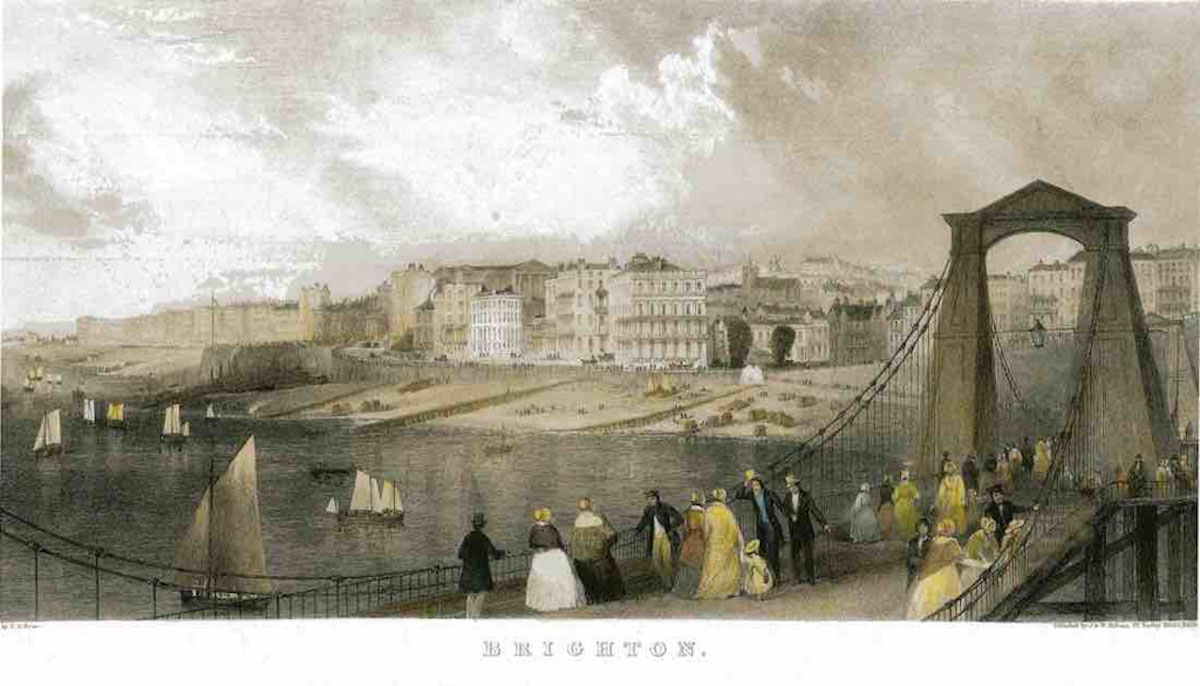 In the mid 1820s, Brighton was a large and prosperous resort with a long, famous frontage and some very striking leisure buildings where visitors could meet.  The Pavilion, revamped in an Indian style, and the Chain Pier became popular subjects for prints and paintings.  A secure future beckoned.

Yet, by the late 1820s, all was not well. Building slowed down, some projects stopped.  A national recession, and the need for the resort to improve its public areas were amongst the issues which affected the resort.  In the crowded back streets, the dense and poor population was a source of infections and disorder.

As the downturn gained a grip, Brighton became keen to get a railway line to London. The line opened in 1841. It did not immediately help to revive the resort, that required the return of public confidence in the economy and willingness to spend on leisure.  By 1845 the slow revival resulted in the completion of old projects and the start of new ones in the latest architectural styles.  Public gardens such as the Steine were improved by raising public prescriptions.

By the 1840s, Brighton’s overcrowded back streets and their impact on public health were of sufficient concern for a report on the conditions to be published in a government study of the health of towns. A campaign started about the lack of a planned sewerage system and access to clean piped water.  After some contention, Brighton was incorporated in the hope that the standard of town management would improve.

New buildings,  small housing infills and suburbs such as Cliftonville  built in Victorian Gothic or Italianate styles, began to change the look of Brighton and Hove.  These styles were also chosen for their new schools such as Brighton College, and by the trustees of local health and welfare charities.

Using contemporary images, maps and modern photographs, we will explore the story of this resort from the late 1820s until the late 1850s.  The  process of change in Brighton & Hove accelerated from 1855 and that will be the subject of the next talk.  This will include the controversy about Anglo Catholicism in Brighton which gave the City some remarkable churches.

The recording of this event is no longer available.