The Planning Forum looked at two significant applications in September, both just north of North Laine conservation area and each with a potentially dramatic impact on the physical environment of the area. The Regency Society is generally supportive of both albeit with comments on improving some details of each.

We looked at 2 schemes for student housing this month.

The first is a very large development proposed for Melbourne Street, just off the Lewes Road near the gyratory.

The application is being made by Vita Brighton 1 Ltd which is part of a group which develops and operates student accommodation.

It will involve demolition of an existing office building and a workshop.  The new building will provide 350 student rooms, plus communal facilities. It will also include 20 affordable homes and over 1,000 square metres of employment space.

The society has no objection to a development of this kind in this location.  However, we are objecting to the massing of the proposed building which we think will have an adverse impact on neighbouring properties. 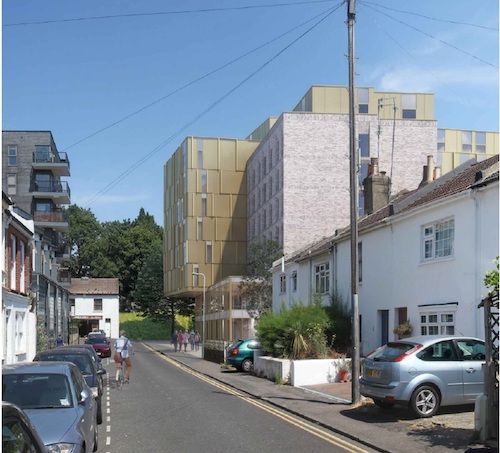 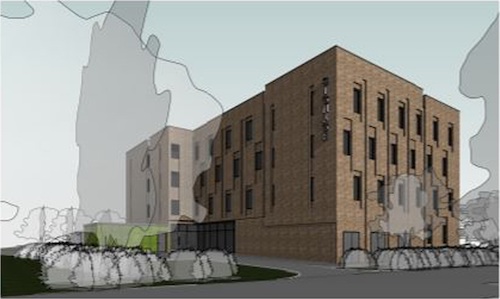 The second student housing scheme is for a site in Falmer near the station.  It is currently occupied by two rather dilapidated cottages of no particular heritage value, which will be demolished.

The proposed replacement is a four-storey building which would provide accommodation for 71 students with associated cycle and car parking and some landscaping.

So far so good, but look at the design! One member described it politely as “too urban” for the location. Another was more blunt, describing it as looking like a prison.

So, as with the previous scheme, we’re saying yes to the proposed demolition and use for student housing, but no to the proposed building, this time on the grounds of a design which is unsympathetic to its neighbours and its location.

Brunswick Street West is located behind the large houses on the east side of Lansdowne Place.  It was probably a mews and like many similar streets in the area it has been re-developed in a variety of ways over the years.

This scheme relates to a site on the east side, about one third of the way down from Western Road.  It has been used recently by a car sales business.

The proposal is to demolish the existing buildings and replace them with five, three-storey, three-bedroom dwellings.  The design is modern but not particularly exciting.

However, it will provide five small homes in a “desirable” location and will probably look a lot better than what is there now.  So, the society is not making any comment. 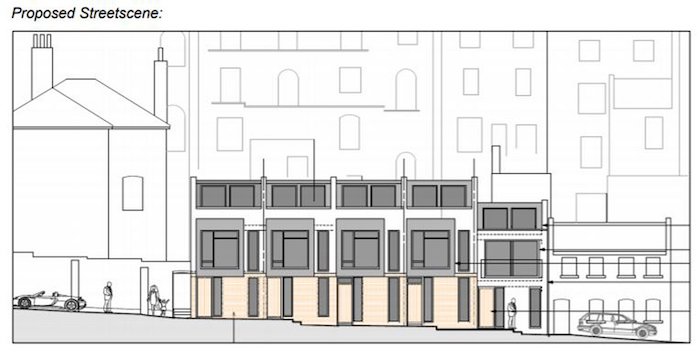 Clermont Church is in Clermont Terrace just south of Preston Park Station.  It was built in 1877-8 to a design by local architect, J G Gibbins. It is an attractive building with an impressive, high-pitched roof.

It is located in the Preston Park conservation area and is locally listed  It is no longer in use as a church. Behind the church there is a more recent, two storey extension which is currently used by the Brighton Academy of Performing Arts.

The Academy wants to expand its space by adding a further storey.  Our image shows the current view from the south west approach to the site.  This suggests that a third storey could have an adverse effect on the appearance of the fine pitched roof.

The problem is we don’t really know, because the applicant has not included a drawing or “artist’s impression” to show what the new view would be from the street. Nor does the application include a heritage statement to explain the significance of the existing building.  So, we are objecting on the grounds of inadequate information.