A castle that fell to a king

Sue Berry sketches the history of a vanished Brighton landmark

Early studies of the development of Brighton as a resort from around 1750 fete Dr Russell as the founder, overlooking the role of other investors. But two inns, the new Castle and the well-established Old Ship, played a significant role as key social centres (see Budgen's 1788 map of Brighton, top left below).

Spotting the opportunities, two men from nearby Lewes, Samuel Shergold (a vintner) and Thomas Tilt (a watchmaker) developed the Castle specifically to benefit from the new visitors. They bought Sir Timothy Shelley’s new house, with its superb eastwards view across the Steine to the sea, and called it the Castle Inn. They soon bought adjacent plots to expand their business, quickly adding a coffee room and an assembly room.

The Castle’s public rooms, which included an assembly or ball room, were almost 20 years old when in 1776 Shergold decided to revamp them and rebuild the assembly room. John Crunden (1741-1835), a local man who had a practice in London and Sussex connections was employed to do the work. Crunden also designed buildings elsewhere, especially  in London – Boodles, designed for the Savoir Vivre Club in 1775-6 and sold to Boodles in 1782-3, is the nearest in purpose to the Castle Assembly rooms and about the same date.

The completed project resulted in four public rooms of which the new assembly or ball room (80x40 feet) was the only one elaborately decorated.  Crunden designed the colour scheme and agreed on furnishings with Chippendale and Haig. They provided everything including  sofas which Crunden described as moriene or morune adding that it was "one of the most beautiful colours I ever saw" (interior of Crunden's ballroom, 1780, bottom right).

Bottom left shows the only known engraving  of the interior published by W H Mason in 1835. (courtesy of the Society of Brighton Print Collectors) 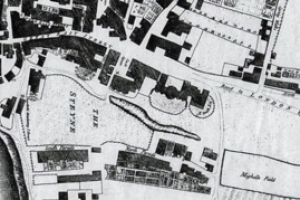 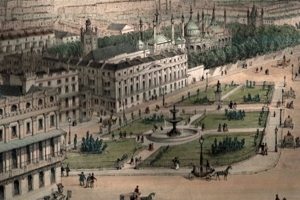 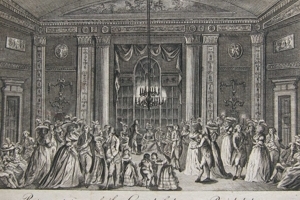 To expand the Pavilion Estate and to enlarge the Pavilion, the Prince of Wales bought the Castle in stages between 1815 and 1822 and sold everything except some land close to the Royal Pavilion and the Assembly Room in 1823. The Assembly Room was condemned by  A.N.W. Pugin as a pagan place of worship when it became the Royal Chapel (sometimes confused with the nearby chapel of ease, the Chapel Royal in North Street) early in 1822 (print top right shows the roof of the Royal Chapel and just west of it the tower for the Pavilion kitchens , late 1840s). As part of the process of expanding the estate, he also bought Grove House, the other building which dominated the Pavilion.

When the Pavilion Estate was sold to the Brighton Commissioners in 1852, the Bishop of Chichester  claimed the Chapel,  which was rebuilt as St Stephens in Upper North Street Brighton  by George  Cheesman complete with the assembly room inside, without its bright colour scheme. It is now First Base Day Centre for the homeless and has recently had a facelift aided by the Heritage Lottery Fund.

Read more about the interesting more recent history of this building

Top image shows the original Marine Palace with the Castle Hotel to the left in 1801. (courtesy of the Society of Brighton Print Collectors)