Above: Hangleton in 1958: Is this a type of housing development a use of land we can no longer afford?

The town planning of the 19th and early 20th century could serve as inspiration for developments such as Toads Hole Valley in the 21st century, suggests David Robson

The City Plan has earmarked Toads Hole Valley, an area of derelict farmland cut off from the Downs by the A27 by-pass (below), as a potential location for new housing. This begs the question about the need for housing in our city. How many and what type of houses does the city need and where can they be located?

In contemplating these questions we need to remind ourselves that in Britain we are now building fewer new houses than at any time since the War (currently less than a half per cent of the existing stock) and that it is increasingly difficult for young people to find a home either to rent or buy.

We also need to bear in mind that England’s population is growing steadily – with four people per hectare, we now have the highest population density in Europe. It is higher than Holland, twice as high as Germany and four times that of France – and the third highest in the world.

If we are to maintain a balanced environment and protect our shrinking countryside, we need to establish denser and more concentrated towns and cities.

Our city is squeezed between the Downs and the sea and, at first sight, offers little or no scope for new house building. Of course, we could ignore the problem and assume that other towns in the South East will build the houses that are needed, or we could set developers free to build them on green fields.

But a city that cannot grow and change will stagnate. We need to find ways to build new housing, at higher densities, on suitable areas of undeveloped land – and we need to augment densities in existing housing areas to exploit our existing infrastructure.

How dense? Much of the city’s growth during the 20th century was low density detached and semi-detached houses – that English compromise of one foot in town and one in the country. Houses built typically at densities of about 20-25 dwellings per hectare (a hectare is an area measuring 100 metres square – about the size of football pitch) offer the benefit of generous private gardens. But is this approach really sustainable when land is in short supply?

Low density suburban housing also requires longer roads, more expensive infrastructure and wastes energy. And we have seen that suburbs such as Hangleton or Moulsecoomb have been too diffuse to develop the critical mass needed to sustain such things as shops and social facilities. 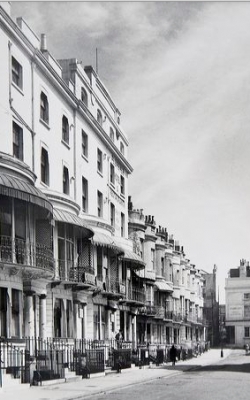 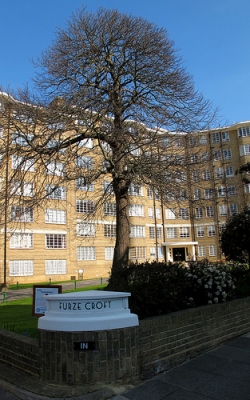 In the past, Brighton has seen the development of innovative housing forms at much higher densities. In the great sea-front squares, multi-storey town houses were arranged around communal gardens. Regency Square (above left, from the James Gray Collection), built around 1820, contained around 70 houses on a site of about 1.75 hectares, including the central garden – a density of 40 houses per hectare. But each house occupied five or six storeys, with a six metre frontage and had an area of around 350 square meters – the equivalent of three or more apartments in today’s terms. So Regency Square offers a model for living at around 120 dwellings per hectare.

At the other end of the social spectrum, the hillside of Islingword was developed with tight rows of cottages, mainly on two or three storeys. Every house had a small patio garden and an on-street parking space. The density? About 90 houses per hectare, though many have since been sub-divided to push the density up to about 150 dwellings per hectare.

And towards the end of the 19th century, the Stanford Estate was developed with bigger terraced houses of two and three storeys, with small front gardens and more generous back gardens, creating a density of 50 houses per hectare, though later multi-occupation has increased this to around 80 dwellings per hectare.

Finally, between the Wars, apartment blocks appeared around the city. Furze Croft (above right), for example, occupies three-quarters of a hectare and contains 120 apartments arranged on seven stories – the equivalent of 170 dwellings per hectare.

All this demonstrates that many of our best-loved and most successful areas of inner-city housing were built to much higher densities than the later suburbs. If developers need inspiration, they can look at the squares, crescents, avenues, lanes and mews of the past.

Densities of around 75 dwellings per hectare would sustain family houses with small gardens, mixed with apartments for singles and couples. If applied to Toads Hole Valley, they would furnish well in excess of 1,000 new homes.

If we’re going to develop an area like this, let’s do it at a sustainable density that offers a sense of urban scale – no more little boxes on a hillside.

Top: image shows aerial view of low density housing in Hangleton in 1958. All housing was built after 1938. (From the James Gray Photographic archive)