The Society keeps a special reserve for occasions when an exceptionally important conservation project comes along. We look after it carefully and do not dip into it often. After careful consideration, the committee has decided that Madeira Arches is an especially deserving and urgent cause. So this is the right moment to put our conservation project reserve to good use.

We've decided that we will contribute as generously as we can afford to the restoration of the Madeira Arches. The Society is pledging £10,000. 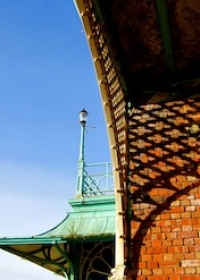 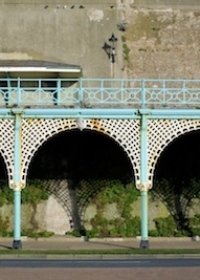 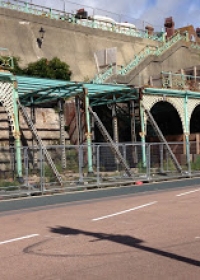 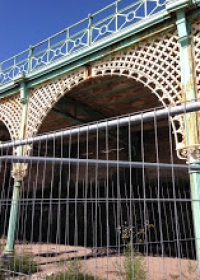 The Arches before and after closure in 2015. The structure has become so precarious that it is a danger to the public.

By setting an example we hope to encourage others, so we will be seeking as much  publicity as possible for our donation. The Regency Society should be taking a lead on causes like this in the hope that others will follow. If our members, the general public and the conservation community locally and nationally join us in contributing we may be able to prevent disaster.  You can help too: please click here to contribute to the crowdfunding campaign.

Why are we doing this?

Our reserves were created many years ago to support the Society's purpose. We were founded to promote the conservation, promotion and improvement of Brighton and Hove's built environment.  We feel we owe it to our current and future members as well as to those who worked hard to create the reserve in the first place not to fritter it away on causes that are anything other than of the greatest importance. We have no doubt that the Madeira Arches is just such a cause.

Madeira Arches is a unique structure. Very few cities anywhere can boast a structure of late Victorian ornate cast iron of such length (738 metres). There are no others in the UK. The Arches has been a memorable backdrop to a large number of events which attract people to Brighton every year - from the speed trials of the early 20th century to the Classic Car run today. This is part of our living heritage enjoyed by countless residents and visitors. We cannot allow it to disintegrate. But this could so easily happen if we, collectively, do not take action. We lost the West Pier. Let us not lose the Madeira Arches.

Projects the Society has supported in the past

The Society was formed in 1945 to be a campaigning organisation that would intervene to save heritage buildings under threat.  Its first real campaign was to save the Royal Pavilion. Members generated considerable sums of money that were invested to restore and refurnish it.  The total sum generated and deployed amounted to something like £200,000 in present-day terms. Later campaigns included the restoration of the archway at the entrance of Park Crescent in Worthing. (Money pledged by the RS was matched by other organisations in this case).

We also supported the creation of an underground car-park in Regency Square. In this case The RS campaigned against a surface car-park and funded a design that proved the feasibility of excavating. (1955-64).
In 1987 we worked with other societies to fund the restoration of the Hangleton Manor Dovecote. We also contributed to the restoration of John Leopold Denman's Baldwin mausoleum.

Our most recent donation was £2,000 towards the options and viability report for the Hippodrome in 2015. 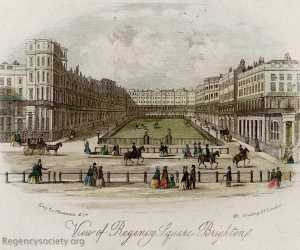 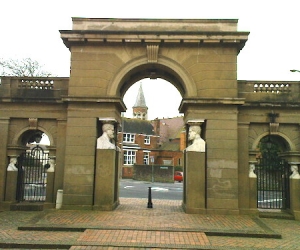 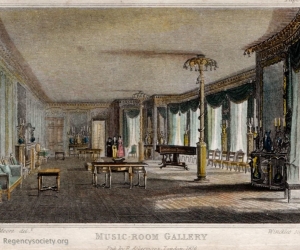 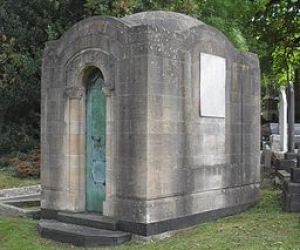 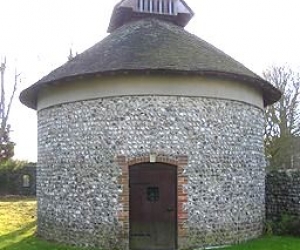 Whilst it may seem big to us, our contribution to the restoration of the Arches is tiny. The Council has launched a crowdfunding campaign to raise the first £429,572 of the several million which it will eventually need. For this reason we urge everyone reading this to consider making a personal donation of whatever you can afford - even £2 makes a difference.  This campaign is struggling to reach its target. Despite over 1,100 pledges it is still only about half way there. The campaign closes at the end of November - please act now by donating today (click here). 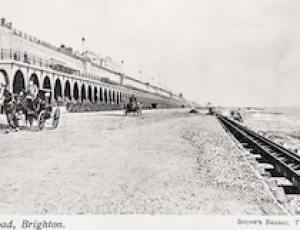 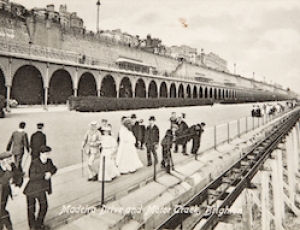 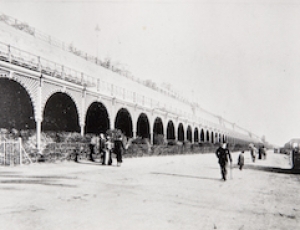 Pictures from the James Gray Photographic Archive showing Madeira Terraces in happier times. These images date from 1897 to 1914.

Top image: Promenading on Madeira drive, twenty-first century style, just before the closure in 2015. The rust is evident.

SBPC: Courtesy of the Society of Brighton Print Collectors

Hangleton Dovecote image by The Voice of Hassocks - Own work, Public Domain, https://commons.wikimedia.org/w/index.php?curid=17638843