There are many supporters of this scheme for our seafront and it’s not difficult to understand why. It’s appealing in many ways and the changes made in the latest application are indeed improvements. But it’s an unfortunate clash with our hopes for Madeira Arches. Perhaps, in this case, there can be no compromise.

When considering the latest application we reviewed our comments on the first one.  We had objected to it on a number of grounds the main one being the need for a holistic approach on the re-development of Madeira Drive. This matched the position of Historic England.  How would the proposal impact on Madeira Arches both in terms of winning funding to carry out the repairs and the viability and long term enjoyment of the unique and treasured Victorian terrace?  We also considered the viability of the Sea Lanes scheme that left us with questions that, as yet, have no answer. 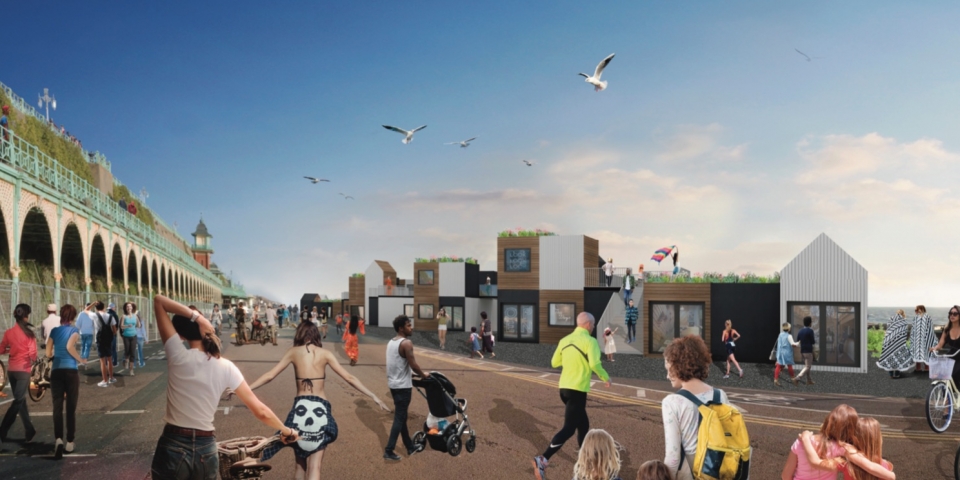 Artist impression of Sea Lanes without re-construction of Madeira Arches

Interesting it is that both schemes require commercial support, the arches for maintenance and Sea Lanes for financial sustainability.  For Madeira Arches there is an intention to create outlets within some of the arches while still maintaining the covered promenade.  For Sea Lanes it is one and two storey units offering offices, refreshments and shops. What would be the impact of both plans running competitive outlets? Do we want such change a of tone along that bit of seafront that presently provides wide views out to sea, unobscured by buildings and peaceful strolls, removed from the bustle of the pier and the marina?  It’s over development in our minds and there can be no compromise in this case.  Therefore we have again objected to the application.

Unfortunately the application is going to planning committee on 3rd April with a recommendation 'minded to approve'. This is despite Historic England and the Heritage Team opposing it.

Below is the Regency Society's objection submitted to the Planning Department:

“The Regency Society objected to the previous scheme and fully supports the Planning Committee's reasons for refusing it. The revised scheme concentrates on the design and materials for the proposed new buildings on Madeira Drive. It also provides improved views and access ways from the roadway through to the beach.  The pool itself has also been moved a little further north. As a result, the scheme is somewhat better than the previous proposal.

However, it does nothing to address the reasons for which the previous scheme was refused.  The proposed new buildings on Madeira Drive will have an adverse impact on the neighbouring listed buildings and on the character of the conservation area. We believe that there is a serious risk that a scheme of this kind would reduce the Council’s chances of obtaining grant funding for the restoration of the Madeira Arches.”