Edward Street is not one of the city’s most attractive thoroughfares. The western section, between Grand Parade and Upper Rock Gardens, is a wide, pedestrian-unfriendly dual carriageway. Its north side presents a depressing series of unattractive, buildings, constructed right up to the pavement edge.

Amex House, previously amongst them, offered a “breath of fresh air” in this unrelenting gloom. Set back from the pavement, its frontage provided an attractive, sunlit public space. It was one of Brighton’s best pieces of late 20th century architecture. The design was distinctive, and the materials were sympathetic to its coastal location.

A proposed new scheme places tall buildings right up to the pavement, closing up this one gap in the street-scene. There are open spaces further back in the development, but their position is unlikely to be as successful as that in front of Amex House. Surrounding buildings will block out the sun for much of the time.

Cafés are included at ground floor level. The plans show open air tables and chairs, creating an inviting impression of vibrant communal spaces. But we do not believe that cafés would flourish in these spaces, starved of sunlight probably subject to wind tunnel effects. They would have a much better chance of commercial success located in a larger, sunnier piazza, open to Edward Street, where they could also enliven that street’s dreary north side.

A tall, dense development is not unreasonable on this city-centre site. The proposed south-west building (block F) could be moved 15-20m. back from the pavement edge to re-create the piazza on Edward Street. The floor space lost could be re-located further back in the site, by increasing the height of the rear-centre block. This would have the extra advantage of adding variety and articulation to the profile of the development.

The designs proposed for the new buildings themselves are boring and bland. They show no sympathy for their location in one of England’s most significant seaside towns. No attempt has been made to use the roofs to create additional green space.

This site offers an opportunity to create a striking architectural statement to match that of the former Amex House. That opportunity will be lost if the current plans are approved. 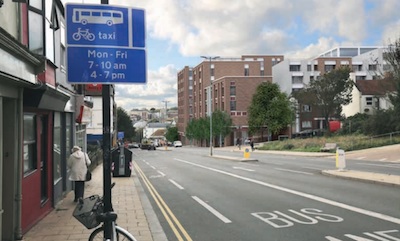 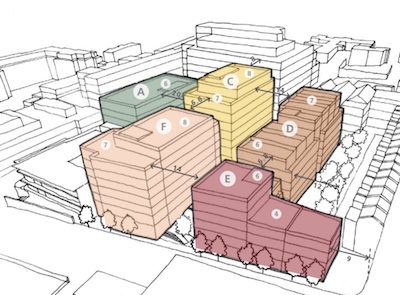 Read our submission to the council