Members will be saddened to hear of the death of our Vice President and former Chair, John Wells-Thorpe, on Easter Sunday 2019.

John made a unique contribution to the Regency Society over the years.  Many will remember his towering but quiet presence at Society events,  whether  he was introducing a visiting speaker or making a thoughtful contribution to a discussion.  Perhaps some of his most significant moments were when he provided wisdom to anyone in the Society who sought him out, those to whom he would listen carefully and to whom he always gave his measured and considered advice.

John was dedicated to public service far beyond the Regency Society. He was a member of the BBC Advisory Board and a Justice of the Peace. He found time for these interests in a long and distinguished international career in architecture during which he was a Council member and Vice President of the RIBA. As President for the Commonwealth Association of Architects he travelled extensively.

A  personal reflection by his friend , architect and academic Stephen Adutt, follows: 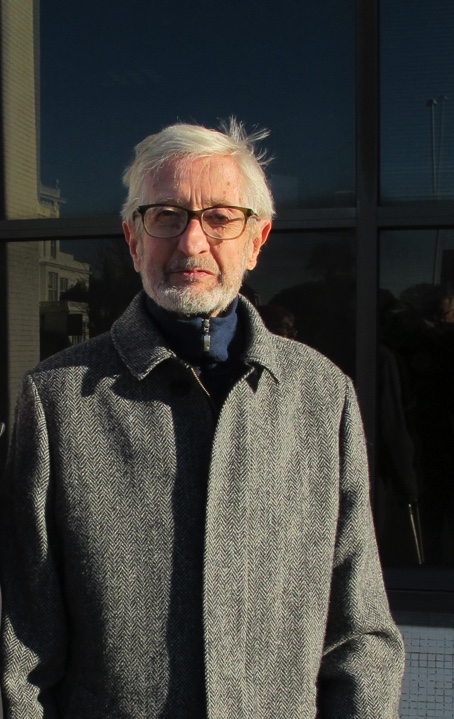 An extended Wikipedia on John would give us all the facts.  We would read about John's career in architecture.  How he worked in two practices: first with Gotch and Partners (1953-1971), where he started  as a trainee and in time became a partner; then within his own practice of Wells-Thorpe and Suppel  (1971--1991). We would learn how, over some forty years of architectural activity, John and his colleagues carried out building commissions primarily in England but also in other parts of the world, particularly in Saudi Arabia, Malaysia, Malta  and Tanzania. As many as fifty projects covered a wide range of building types, civic, commercial, educational, ecclesiastical, medical, residential  and the workplace.

From time to time, over and beyond these working years, the Wikipedia would list some dozens of John's parallel activities and responsibilities, sometimes to architecture, sometimes to the church or to education or to society.  Such key roles and duties extended beyond the remits of the OBE which he was awarded by the Queen in 1995 'for Services to Architecture'.   In my view he deserved more.

Yet when reading such an extensive Wikipedia our underlying sense of John would be lost. Instead, we would gain a greater insight by reading his book 'Behind the Facade, An Architect at Large’.(Book Guild 2009).  There we would find revealed a man with a rich sense of humour, a man keen to understand all aspects of the times and situations in which he lived, knowledge which enabled him to develop appropriate management skills,  which in turn increasingly allowed him to become a sound administrator and leader.  So he nurtured his own ability to walk with all walks of life, from his 1947 Singapore national service gunnery squad personnel to his later spread of contacts, to the Governor Generals, High Commissioners, Bishops, Archbishops, Heads of Industry and even Royals.

In his book John shows how critical it was for the head of a 'private sector’ practice to react sensibly to the inevitable rises and falls of the national economy.  So he surrounded himself with a good team of design and technical collaborators, who he was then ever concerned to hold together, to whom he was prepared to delegate and for whom he knew  that it was his responsibility to find work.  He also knew that some of his practice’s much needed clients wanted buildings primarily to 'improve business’, upon which he later reflected  "never talk to shopkeepers about aesthetics  or the greater public good".

It was left to the range of the practice’s completed projects to demonstrate not only functionality but also creativity,  whether they showed sympathy for the scale of their surroundings like Hove Town Hall (1970-74) or whether they showed care for building detail.  The latter is exemplified over many times, such as at Brighton’s Brighthelm Centre (1987) fronted by John Skelton’s sculptured ‘Loaves and Fishes’; or at Dulwich College where John the architect designed the Shackelton Science Block (opened by Lord Shackelton, the explorer’s son, in 1989), the new work with its red and buff brick livery matching the neighbouring  buildings by Charles Barry ; or at the College’s War Memorials to which John had earlier added  two standing stones  with his own sensitively designed name- inscribed tablets.    All such detail, whether self -generated or whether inspired by work from chosen artists and sculptors, known or unknown, would have been familiar to John.  After all, he was  himself  educated at Brighton’s famous College of Art.

In 1991, having ended a forty year period of architectural endeavour, John embarked on a last and different lease of working life.  Although already the responsible Chairman of Hove’s Martlets  Hospice, he was  also now made Chairman of the NHS South Downs Health Trust.  Over a six year period of tenure he was able to enjoy just being a Client who commissioned other architects to design buildings.  A series of neighbourhood medical facilities were planned. These would address local needs such as the care of the mentally ill or of the frail elderly or of injured children.  Here John’s management talents flourished as always, while he was again also able to contribute to national medical publications which dealt with the nature of healing through thoughtfully designed environments.

In  'Behind  the Facade' John no doubt deliberately chooses to leave out his more personal life.  We might glean that he was religious.  From his earliest student written thesis on Modern Church Architecture,  checked  by his diocesan bishop George Bell of Chichester, John clearly remained a loyal member of the established Anglican church. This in spite of the church's harsh ruling that John's father, having  committed  suicide, was allowed only to be buried in an unmarked grave.  Undeterred, perhaps forgiving, perhaps strengthened by regular visits to a retreat, John's involvement in the design and repair of places of worship lasted a lifetime.

Nor does John the author choose to tell us about himself as husband and family man.  His first wife, Ann (married 1954) is mentioned only once by name, as are their two children, Frances (born 1956) and Peter (born 1957).  We learn of his second wife, Meta (married 1989-2019) because ‘Behind the Facade' is dedicated to her:

“For Meta, without whose encouragement and persistence this book would not have been written“