Portland Street in the North Laine is interesting. At the northern end there is a corner site which for several years has stood empty and uncared for even though it is in the heart of one of Brighton’s busiest areas.

And immediately to the south in Portland Street itself there is a terrace of town houses built fairly recently but in a period style which suits the location well, unless of course you object on principle to modern copies of old designs.

Behind this terrace there is a car park which developers have had their eyes on for a while as a possible site for more new homes.  There have been several applications, but nothing has happened yet.

The latest attempt is for just four new houses, with parking spaces beneath. We have looked at the plans and submitted a number concerns to the planners:

Overall we think the proposed scheme is poorly designed and would represent over-development of the site.

If you’ve walked along Black Lion Street recently you may have noticed that Moore House on the east side is looking a bit sad.

It was designed by architect, Piers Gough. Interestingly, while speaking at a Regency Society event, he admitted that if he could start again, he would use a different colour. The picture shows that if this scheme is approved, the colours will be very different indeed.

The Regency Society believes the changes are to be welcomed however the application has been refused on the grounds that the bright colours will dominate creating a characteristic inappropriate for the Old Town Conservation area. 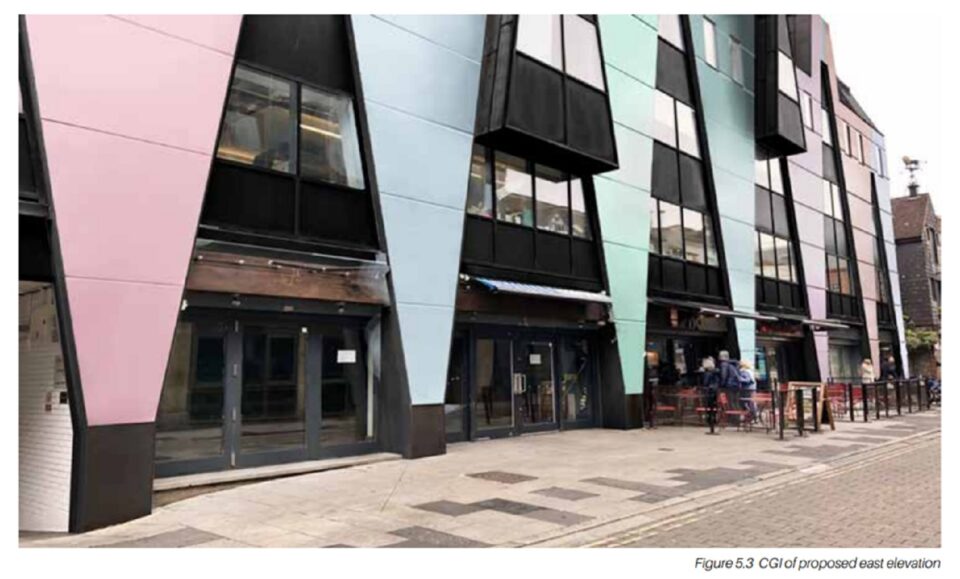 A tight squeeze in Clifton Hill?

Back in May we looked at proposal for a small office building behind some rather unsightly garages at the bottom of Clifton Hill. The Society made no comment.

It has now been refused because of its adverse impacts on the Montpelier and Clifton Hill Conservation Area, and on the neighbours.  Almost immediately, a new application has been submitted for an L-shaped three-bedroom house, on two floors, with a (very small) garden.

If, for some reason, it was necessary to fit a three-bedroom house into a space this size and shape, this proposal would probably count as an ingenious solution.  However, the site will be very cramped as well as being seriously overlooked by several nearby properties.

The Society is not objecting:  we don’t believe the development will seriously affect the local street scene, and perhaps there is a family who won’t mind being overlooked and will relish the tight squeeze.