St Congar recently carried out a public consultation on their initial ideas for the masterplan. 825 new homes are proposed (against a Council target of at least 700). In our comments on the City Plan back in 2014 we suggested that the site should be developed more densely than the planners were suggesting. We proposed up to 1,300 new homes. We think this can be achieved while meeting other demands including a school, offices, open space etc.

There are several good reasons why the planners should encourage more housing at Toads Hole Valley than originally intended:

St Congar’s plan shows more housing than the minimum set by the planners, but, in our opinion, not as much as it should.

We understand the concerns of local residents about the plans to create several new traffic junctions on King George VI Avenue. This road is already heavily used and the new junctions may create congestion. St Congar needs to consult closely with the City’s traffic planners and publish more detail on traffic flows.

Originally landowners and the City Council were to produce a masterplan for Toads Hole Valley. Clearly the Council has played its part. It is good to see St Congar on the scene. Let’s hope they can produce a plan that makes effective use of this highly significant piece of land.

Note: next month's update will include a new feature article by David Robson about the history of housing density, arguing for 6 storey living in new developments to create viable communities. 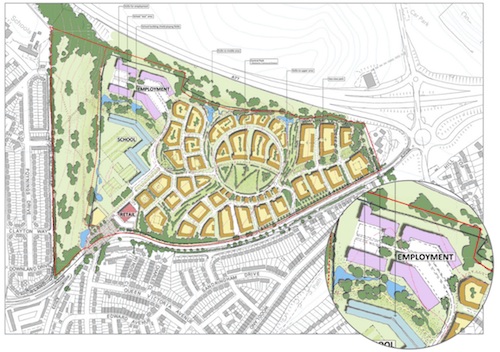