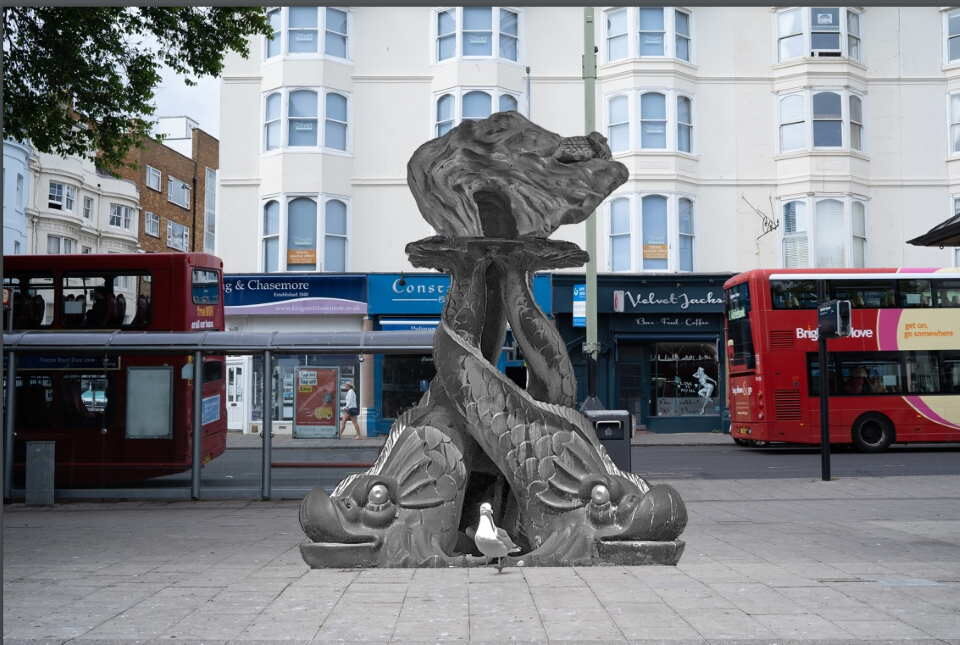 Proposed site of the Dolphins at Norfolk Square

If you have a long memory you may remember the dolphins being removed from the base of the fountain in Steine Gardens. It happened in 1995 when the current occupants were installed in their place. Since then, the old ones have been in storage.

Until now, when a community group, working with sculptor Steve Geliot are proposing to re-locate them to the north end of Norfolk Square.

Planning permission is required. The proposed location is on the busy footway on the south side of Western Road, immediately opposite the entrance to Norfolk Square garden.

The Regency Society fully supports the principle of re-using the original dolphins in this way. However, we are not convinced that the proposed location is appropriate. It is in the centre of a busy footway and close to a bus shelter.

The proposed statue will not block the pedestrian route, but it is likely to create congestion, particularly if passers-by stop to stroke the attractive creatures, as the sculptor hopes they will.

Regretfully, we have asked the Planning Committee to refuse the application as it stands. We hope that a more suitable location can be found nearby, for example on the grass at the bottom of the steps into the garden.

Madeira Drive Brighton, or is it International Drive Orlando?

There was a time when Madeira Drive was a pleasant place to stroll, with almost uninterrupted sea views.  Now, it is becoming increasingly developed, from the catering plaza by the Zip Wire to the already approved rope climbing feature shown in the illustration.

A new planning application has been submitted proposing a raised seating area for the nearby café. Why raised? Because the plan is to build over the nearby Volks Railway line.

The application contains many fine words, including a claim that the structure will improve the setting of the listed Madeira Arches opposite, but it fails to convince.

Our view is that the raised seating area will not enhance the setting of the listed arches. It will simply add to the growing clutter along the beach-front. We are also concerned about the risk of damage to the rail line or the vehicles running along it, if anything falls or is thrown from above.

For these reasons we hope the application will be refused.

Doing it the right way 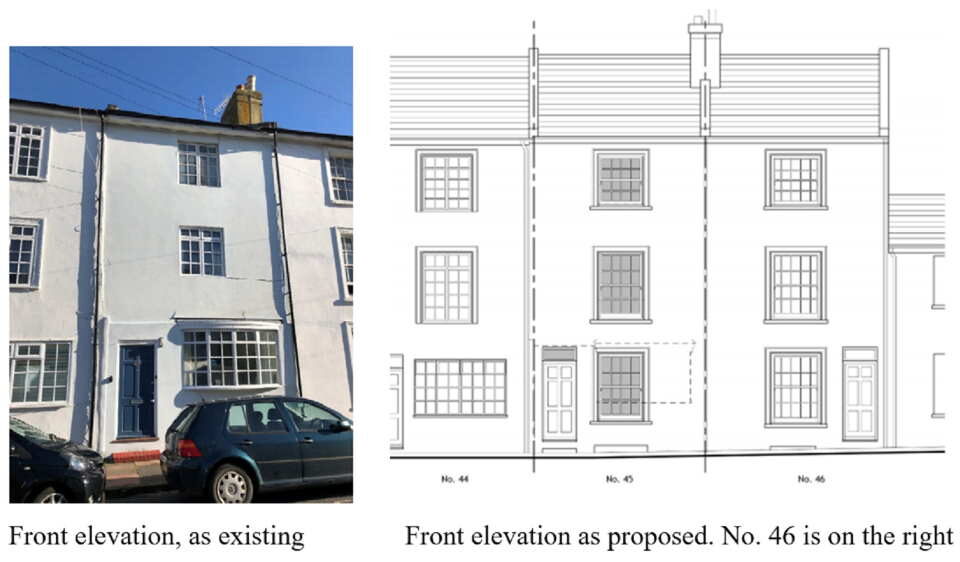 Number 45 North Gardens is an unlisted mid-19th century terraced house in the West Hill conservation area. A proposal has been submitted for removal of the existing bowed bay window and various other alterations.

Next door, the front elevation of number 46 is pretty much as it was originally designed;  so it has been taken as a model for the changes to number 45.

All the moulded window surrounds and stone sills would be reinstated. The windows will be replaced with timber multi-pane double-hung sashes. The front door will be set back in its original position and the fanlight reinstated. Alterations are also proposed to the rear elevation, some involving the use of UPVC, “but in a style and pattern to match the originals”.

The alterations proposed for the front will be substantially beneficial to the character of the conservation area. Those to the rear are, on balance, beneficial; the local Article 4 Direction allows UPVC for rear elevations.

We welcome this application and hope it will be approved. To quote the excellent Heritage, Design and Access Statement that accompanies the application, “It is refreshing to see a homeowner willing to reinstate the proportions and character of their home, rather than just replace the joinery within the inappropriate openings".