A Modern House with Style

We are welcoming a proposal to build a new five-bedroom house on a vacant plot in Surrenden Road. The site is between two existing houses and looks as if it has never been developed.  It has been the subject of a number of very different applications. 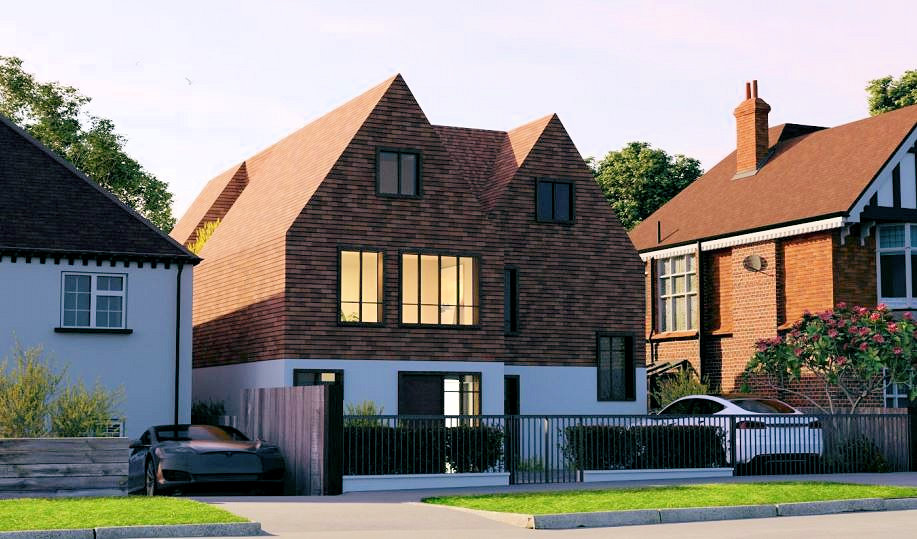 This latest scheme proposes a contemporary design. The wording of our comment to the Planning Authority is as follows:

“The Regency Society of Brighton and Hove  supports application BH2020/01216 for the erection of a five-bedroom house on the land adjoining 89 Surrenden Road.

The proposed scheme is a contemporary design with very clean junctions between surfaces. There are, for example, no gutters along the lower edges of the sloping roofs. The plans for each floor are well thought out. It is interesting to note the unusual detail on the sides at first floor level consisting of two external planted areas.

The choices of materials, red/brown tiles and white render, will blend in well with the character of the area.”

One building too many?

Just take a look at the 3D illustration below! The road running across the bottom left hand corner is Davigdor Road. The grey building on the left and the four linked buildings across the top don’t exist but have been approved. The large L shaped block in the lower right-hand corner includes the Montefiore Hospital.

That leaves the two blue buildings. The one on the left already exists. The other is the subject of a new planning application just submitted: it would be a six storey block of 43 flats over a car park.

We have discussed this with Hove Civic Society at our joint planning forum. Both societies agree that the application should be refused and Hove Civic will submit an objection. The proposed new building is far too close to the hospital. Very little detail has been provided about the design and materials and nothing to show what it would actually look like.

Meanwhile, nearby at the junction of Cromwell Road and Palmeira Avenue,  a third attempt is being made to get approval for a large new building. Previous versions proposed housing and a hotel. We objected to the hotel which seemed rather an odd idea for this location. It has now been dropped  The whole site is now proposed for housing with a south facing landscaped garden to the rear. The appearance has been improved slightly but the overall design is still uninspiring. For example, none of the flats include balconies.

The formal application for this has not yet been submitted but you can see here the consultation document.  The public consultation period was very short and has now closed but The Regency Society has submitted to the council this comment.

Further images and details will be published later on this website.